The rest of the interior is largely BMW based but with Alpina touches, such as excellently stitched leather, a small plaque on the transmission tunnel and the application of some carbonfibre trim. There’s a unique Alpina treatment on the instrument cluster and – now new – when there’s somewhere on the infotainment panel that shows a car, it now displays the Alpina version, not the BMW on which it’s based. Even in the right colour.

There are selectable chassis, steering and engine modes as on the base BMW, but on a track I figured I might as well pick the firmest chassis and angriest engine and gearbox, because on the softest setting, I wouldn’t find out much about ride comfort anyway. And with the big accelerative, braking and cornering inputs that a test track puts through a car, the B4 holds up terrifically well for a large, road-focused car on a hot day.

The B4 is fiercely quick to accelerate – 0-62mph is 3.7sec – with smooth and fast gearshifts and, in the sharpest engine and gearbox mode, the occasional and very subtle exhaust pop and burble on the overrun. It has a less gravelly engine note than I remember from a recent M3/M4 experience, with some six-cylinder yelp, but feeling smoother and quieter than an M car. Watching some cars lap from a vantage point beside the track, a fleet of turbocharged petrol or diesel Alpinas makes for a particularly subdued track-day noise. You largely only hear them when you can also see them.

The B4 steers with medium speed and weight (that’s selectable), and with excellent accuracy. Body movements are relatively quick and sharp but very controlled. There’s mild dive under braking, helping plant the nose, and once settled into a cornering stance, the chassis balance is terrific. 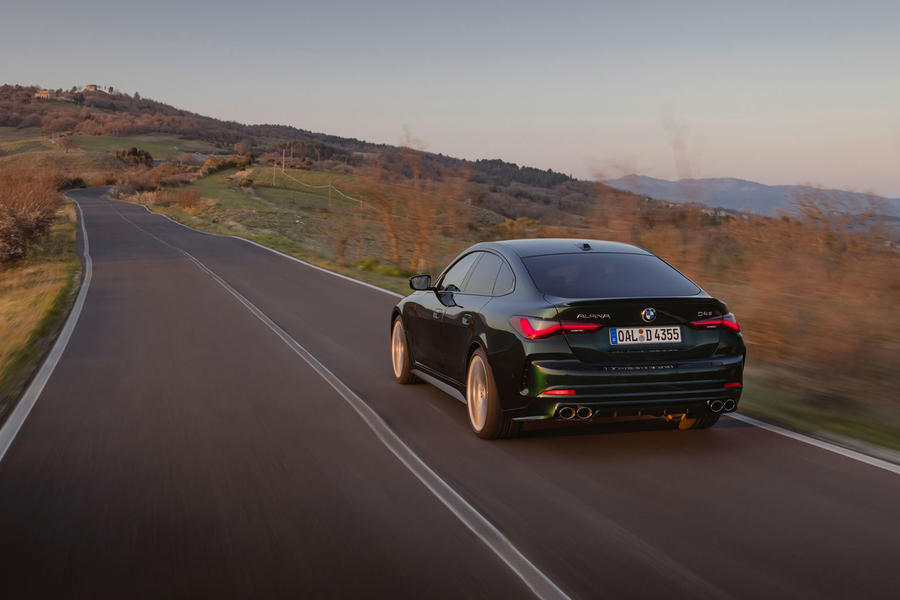 Alpina’s engineers talk a fair bit about getting the entry speed correct on track. If you try to carry too much speed, this front-engined, 4.8m-long, 1965kg car will nudge into stabilising understeer, as it should do – and as you might like it to, in very long, very fast sweeping bends.