A shift toward electric future has made it necessary for industry players to reorient their business model and accelerate the electric vehicle (EV) game. Last week, a few auto biggies including General Motors, Ford and Toyota provided updates on their efforts toward an electrified future. General Motors is leaving no stone unturned to demonstrate its EV prowess. Following strategic alliances with Nikola and Uber during the week ended Sep 12, General Motors took the EV game a notch higher in the past week. The U.S. auto giant unveiled the Ultium Drive system via which it seeks to build a vertically integrated electric car business, much like Tesla.

Meanwhile, Ford revealed ambitious plans to develop a $700-million plant at the Rouge complex, wherein it will manufacture the first all-electric F-150 pickup, whose sales are expected to start by mid-2022. The Rouge Electric Vehicle Center will enable battery assembly and production of the new Powerboost Hybrid F-150 and fully-electric F-150, flaunting its new powertrain that has more power and torque than combustion trucks. Additionally, the expanded plant will create 300 job requirements for the manufacturing of the upgraded truck fleet. Further, Toyota revealed plans to invest INR 2,000 crore toward the development of EVs in India, in order to cater to domestic demand and for exports.

Recap of the Week’s Most Important Stories

Fiat Chrysler FCAU and PSA Group restructured the terms of their merger, which is set to close during first-quarter 2021. This decision comes in as a measure to preserve more cash for the companies’ future merged business, Stellantis. As part of the revised terms, Fiat has lowered the previously agreed 5.5-billion euro ($6.2 billion) of special dividend to 2.9-billion euro ($3.4 billion). This is to be paid to shareholders of the company before the deal’s closure. Moreover, the boards of both Fiat and PSA will consider a prospective distribution of 500 million euro to shareholders of each company before the transaction’s closure. The decision will be taken after monitoring the performance of both the companies during the transition period.

Sonic Automotive SAH provided an update on business operations and guided third-quarter profits. New car sales volumes declined 17% and 21% for July and August, respectively.Volumes declined around 9% for the first half of September. Meanwhile, as expected, Sonic’s EchoPark unit emerged as a winner even amid the COVID-19 crisis. Used vehicle unit sales volumes at the EchoPark segment rose 19% and 4% year over year for July and August, respectively. Volumes further surged 36% for the first half of September from the comparable year-ago period. Despite coronavirus woes, the EchoPark segment recorded higher year-over-year sales for the last reported quarter. Based on robust growth of the EchoPark segment, Sonic expects third-quarter earnings per share in the band of $1.08-$1.15, suggesting 64-74% increase from the year-ago level.

General Motors GM unveiled the ‘Ultium Drive’ system, which will aid the company in transitioning to a fully-electric lineup down the road. The auto biggie is set to put into production ‘a set of five interchangeable drive units and three electric motors’, collectively referred to as Ultium Drive. So basically, rather than outsourcing for EV parts, the company looks to develop and produce the components in-house. By choosing to design its own e-axles, General Motors will be able to better integrate those with an electric car’s battery and the rest of the EV. The company’s next-generation EVs (from small electric cars to electric pickup trucks) will be powered by Ultium Drive, which will not only boost General Motors’ manufacturing efficiencies but will also enhance the performance and range of its future vehicles.

After careful evaluation of Volkswagen’s VWAGY offer to buy Navistar NAV, the latter dismissed the revised proposal, citing that the bid is too low. The board concluded that the $43/share offer significantly undervalued the company but was a starting point for exploring a possible transaction.Volkswagen’s truck arm, Traton SE might have to hike its takeover bid again to purchase Navistar. Considering Volkswagen’s limited exposure in the North American truck industry, and Navistar’s strong footing in the region along with impressive dealership networks, it would make sense for the Germany-based auto giant to make every effort to purchase the remaining shares of Navistar and become its sole owner.

Westport Fuel Systems Inc. WPRT announced that it has signed a conclusive agreement with its joint-venture partner in India — Uno Minda Group. Per the agreement, Westport Fuel will sell the assets of its wholly-owned India-based subsidiary, Rohan BRC Gas Equipment Pvt. Ltd., to Minda Emer Technologies Ltd. Minda Emer Technologies, a 50:50 joint venture owned by Canada-based Westport Fuel and UNO MINDA, is one of the leading manufacturers of Alternate Fuel Systems — CNG and LPG kits for OEMs and aftermarket in India. This extended partnership between the companies will help them achieve their goal of becoming the best sellers of CNG products in the automotive market in India.

The following table shows the price movement of some of the major auto players over the past week and six-month period. 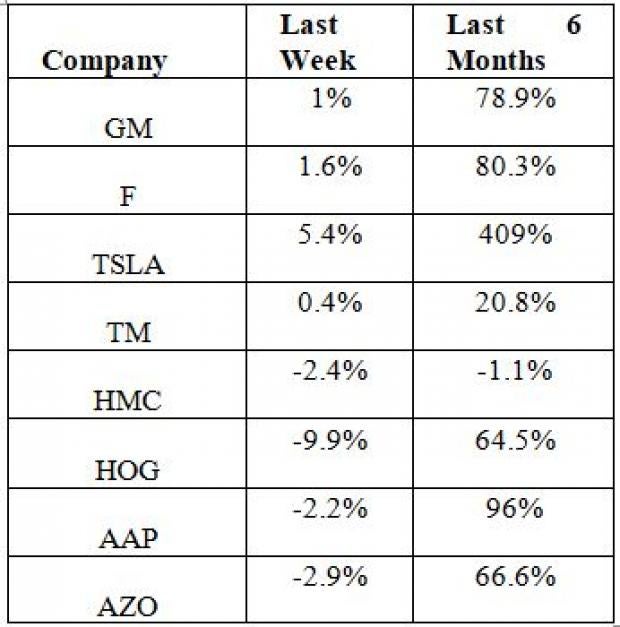 In the past six months, all stocks have increased, with Tesla being the maximum gainer. The past week displayed mixed share price performance, with Harley-Davidson registering the maximum loss, while Tesla gaining the most.

What’s Next in the Auto Space?

Industry watchers are keenly waiting for Tesla’s Battery Day, which will be hosted on Sep 22, wherein the company is likely to make several announcements about its efforts to minimize cost and enhance the range of batteries. Also, investors are awaiting the quarterly results of AutoZone and CarMax that are set to be released this week.

From thousands of stocks, 5 Zacks experts each picked their favorite to gain +100% or more in months to come. From those 5, Zacks Director of Research, Sheraz Mian hand-picks one to have the most explosive upside of all.

With users in 180 countries and soaring revenues, it’s set to thrive on remote working long after the pandemic ends. No wonder it recently offered a stunning $600 million stock buy-back plan.

The sky’s the limit for this emerging tech giant. And the earlier you get in, the greater your potential gain.