Most travelers know that Spirit Airlines is a low-cost airline. They’re likely aware that a Four Seasons is almost always more expensive than a Motel 6.

But when it comes to rental car companies, which one usually has the lowest prices? Is Thrifty all that thrifty? Will Budget best help you stick to your budget?

A NerdWallet analysis conducted in March tracked 360 rental car prices across eight major U.S. companies to find which had the cheapest car rentals — and which had the most expensive.

By almost all metrics, National Car Rental was the most expensive, followed by Alamo Rent a Car. Enterprise Rent-A-Car, Budget, Hertz and Dollar ranked among the cheapest.

In our analysis of average rental car prices across different companies, weekly car rentals ranged in cost from $480 to nearly $700 — a difference of more than $200. 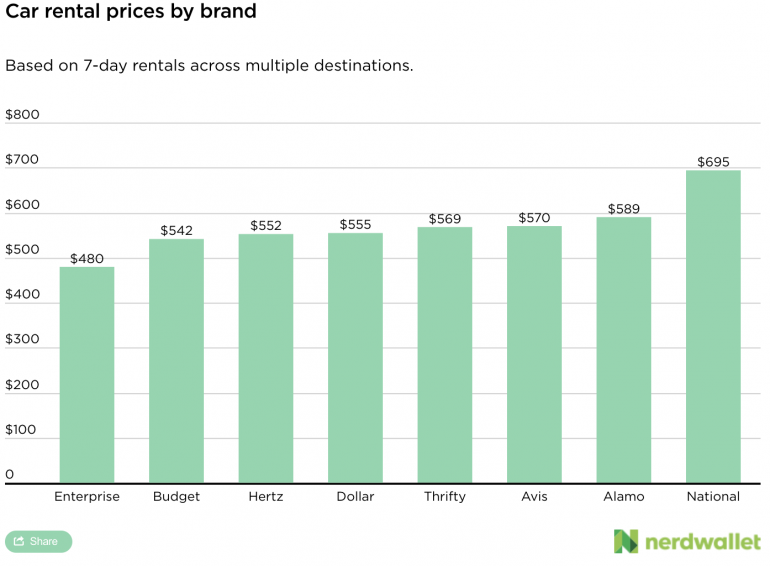 The prices analyzed in this study were based on rentals over a mix of dates throughout the next three months, and for both downtown and airport locations in regions that host the nation’s 10 largest airports. Rental types were the cheapest possible option (typically a small sedan) that allowed you to pay at the counter (as opposed to upfront in advance), and include taxes and fees.

The cheapest and most expensive rental car companies belong to the same parent company. Enterprise Holdings owns and operates the Enterprise Rent-A-Car, National Car Rental and Alamo Rent A Car brands, which together comprise a fleet of nearly 1.7 million vehicles through a network of more than 9,500 rental locations worldwide.

The Hertz Corporation, which is the parent company that operates the Hertz, Dollar and Thrifty vehicle rental brands, was a little more consistent across all of its brands in terms of pricing; their average weekly rental car prices were within about $18 of each other.

How to save on rental cars

More than $500 a week to rent a car can be a hefty chunk of your vacation budget. Thankfully, you might not necessarily be tied to paying the sticker price. Here are a few smart ways to save on rental cars:

Change how you book

A separate NerdWallet study in March found that booking rental cars in advance often doesn’t actually save you any money. If you’re fine with the uncertainty of booking last-minute, you might actually save more than if you had not been a procrastinator.

People arriving to their destination by air and who intend to rent a car upon landing might also save more money by booking from a nearby, off-site car rental location (as opposed to the rental car outpost located at the airport). Another NerdWallet study, also in March, found that rental cars tend to be about 20% cheaper when booked off-site versus at the airport.

Some credit cards for car rentals outshine others, offering bonus points and miles for paying for your car rental on that card.

Most major car rental companies have accompanying loyalty programs that can earn you free rentals and upgrades.

While National’s car rentals tend to be among the most expensive, its loyalty program — dubbed the National Car Rental Emerald Club — is one of the best. Members with Emerald Club Executive Elite Status receive a free car rental day for every five qualified car rentals made, on top of other benefits like complimentary private airport delivery.

If all else fails, you might skip renting from a major rental car company completely. Look to car rental alternatives, which are companies that have devised clever ways of getting your hands on the wheel, whether it’s peer-to-peer car rental services for borrowing an individual owner’s vehicle, or renting a car from an actual car dealership (such as Audi’s Silvercar service).

Rental cars are expensive, and they’re not getting any cheaper. If you prioritize getting the best possible deal, then it’s a good idea to browse prices across multiple rental car companies and — if you can be flexible — across multiple locations within the same city.

But generally speaking, deal hunters might want to start the search with Enterprise, Budget, Hertz or Dollar — which rank among the cheapest car rental companies.

JT Genter contributed to this report.

The article Which Rental Car Company Usually Has the Lowest Prices? originally appeared on NerdWallet.

9 hours ago Cara A